skip to main | skip to sidebar

When I was watching the movie "The Outsiders" I realized that this movie has some things in common with the short story, "Lather and Nothing Else".

The photo on the right is the cast of the movie, The Outsiders.

One thing that The Outsiders has in common with this short story is that it is all about opposing sides; opposing gangs. In Lather and Nothing Else, the barber is from one side of a conflict - he was a revolutionary. Captian Torres was the leader of the opposing side, and he killed many people on the barbers side.

Another thing that the movie has in common with the story is that some murders only happen because people are on opposing sides. I believe that if the people in the movie were not in opposing gangs, that they would be friends. In the movie I can see that many of the characters have many of the same qualities, and they could be friends. I can relate this to Lather and Nothing Else because the barber was contemplating murdering Captian Torres only because he was on an opposing side.

This movie and this story have a lot in common.

Critical and Creative Thinking - The Outsiders. http://cache.idolator.com/assets/resources/2007/07/outsiders.jpg.
Posted by Lady Macbeth at 4:49 PM No comments: I was looking through pictures on a website, and I came across the one on the right. It is a picture from the movie, "Sweeney Todd", and it reminds me of Lather and Nothing Else.

I think that this picture represents Lather and Nothing Else very well.

Comparing and Relating "Lather and Nothing Else" to "Sentencing" By BoysNightOut 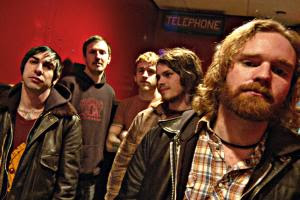 The picture to the right is a picture of the Canadian band from Burlington, Ontario; BoysNightOut.

Both of these stories are about murder, regret, and consequences.

In both stories, the main characters have thoughts about murder. In Lather and Nothing Else, the main character contemplates killing Captain Torres whilst shaving him, as though he was one of his normal customers. Captian Torres was definitely not a normal customer, since he killed many innocent people. In Sentencing, the narrator explains how he murdered someone, and how he is a murderer. Both stories are all about wanting to murder someone, and in Sentencing, actually murdering them.

One of the other main themes of these stories are regret. In Sentencing, the song is all about how the main character regrets murdering someone. In my opinion, the writer of this song is trying to show the struggles of dealing with a murder, and how much the person regret it. Lather and Nothing Else shows regret in the way that the barber thinks of all the things that could happen if he commited murder and realized how much he would regret it, so he never actually had a chance to experience the regret.

The other main theme I noticed that these two stories had in common is realization of consequences. In Lather And Nothing Else, the story is about how the man is contemplating murder, but never follows through because he realizes the possible consequences. Sentencing shows this by repeating "nothing makes sense anymore, when murder's just a mistake that you have made." This shows that the consequences that were given to the main character make your life harder, rather than easier.

In my opinion, both of these songs are interchangeable, theme-wise.
Here are the lyrics to the song, Sentencing, By BoysNightOut. 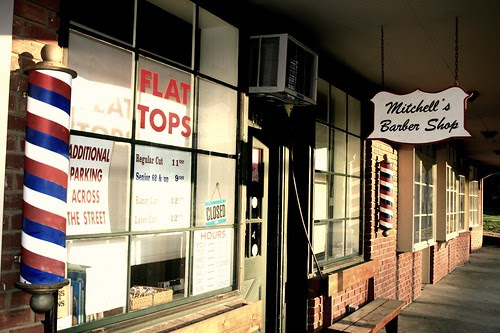 For my English ISU, I have chosen to analyze the short story, "Lather and Nothing Else" by Hernando Tellez. In my next three blog posts, I will be comparing this short story to three different things; three different forms of media.

This short story is about a man who is placed in the situation of having to be civil to his worst enemy. He has to do his job well to a man that he is not comfortable being around. The two characters, the barber and Captian Torres, are both from different society groups, and they are from opposing sides in the war. Both characters are aware of the situation, but as the story progresses, the two try to remain civil to one another.

I chose to use the above photo because this was how I imagined the setting in Lather and Nothing Else. It looks like an old time barber shop, and it was exactly how I pictured it in the story. When I look at it, I could imagine this story taking place; I could imagine Captian Torres walking through the door.

I am looking forward to analyzing the story, Lather and Nothing Else.

Welcome To My Blog

Hello, my name is Tiffany and I am 15 years old. I like music, going to concerts, playing instruments, reading, hanging out with my friends, watching movies, and writing. The instruments I play are guitar, drums, bass clarinet, clarinet, bass guitar, and some other ones. Some of my favorite bands are UnderOATH, Cute Is What We Aim For, Atavan, Bayside, Four Year Strong, Taking Back Sunday, The Fire Restart, For All We Know, View from Ida, Mayday Parade, Silverstein, Stereo Skyline, and many more. I do feel that Bayside did change the way I look at the world.

Right now, I am working at a Banquet Hall. I work as a server, and I have to do many different cultural ceremonies. I wouldn't say that I am happy with this job, but it gets me money and many people my age don't even have jobs. I am not exactly sure what I would like to be in the future, but I do know that I do not want to be working at a banquet hall for the rest of my life....

My usual days are very boring. Usually, they just involve me going to school, and coming home and using the computer. On odd days I will go downtown, because I love to go downtown, even if it is just to walk around. I love the lights and the city life is just interesting to me. I also take music lessons on Fridays, so I am not usually home on Fridays.

I will be using this blog to complete assignments for Ms. MacAdam's 2D english class for my high school in Toronto. I will be writing blogs about things I like and they will be focused on my opinions on things that interest me.
Posted by Lady Macbeth at 6:48 AM 3 comments: 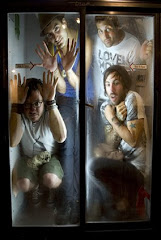